Klungkung is the smallest regency in the Bali province. This busy market town on the main route to Besakih and Amlapura is steeped in history and has some noteworthy sites. It is bordered by the stony Unda River with its great expanse of weirs protecting the surrounding villages during flood times. In the east side, the landscape is still scarred by the lava streams of the eruption that occurred in 1963. Bali’s smallest district Klungkung is located between Gianyar and Karangasem, and includes the island of Nusa Penida, Nusa Lembongan and Ceningan. 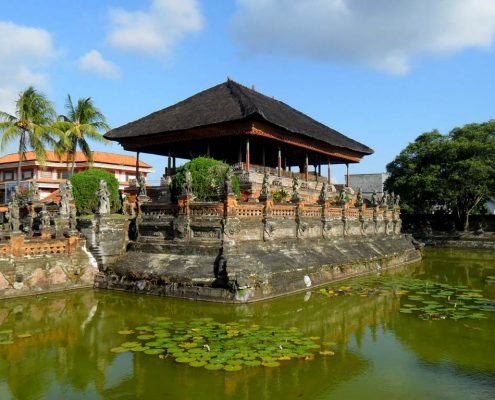 The Klungkung Palace, officially Puri Agung Semarapura, is a historical building complex situated in Semarapura, the capital of the Klungkung Regency (kabupaten) on Bali, Indonesia. The palace (puri) was erected at the end of the 17th century, but largely destroyed during the Dutch colonial conquest in 1908.

The existing palace contains a large square with spacious courtyards, lush gardens, pavilions and moats. Stone walls with water lilies in the moat surround the very beautiful Taman Gili complex. The uniqueness of Kerta Gosa can be recognized from ornamented ceiling illustrating popular artwork conveying good against the evil painted with the 2-dimension puppet style.

Today the basic remains of the palace are the court of justice, the Kertha Gosa Pavilion, and the main gate that bears the date Saka 1622 (AD 1700). Within the old palace compound is also a floating pavilion, the Bale Kembang. The descendants of the rajas that once ruled Klungkung today live in Puri Agung, a residence to the west of the old palace, which was built after 1929. 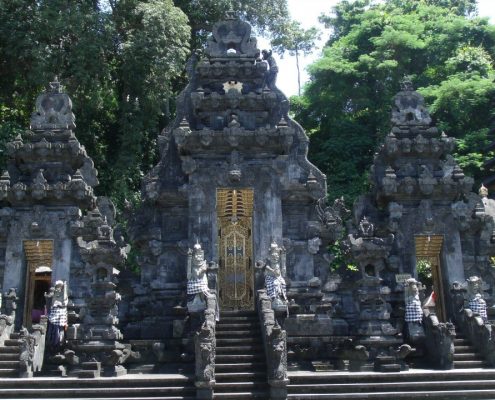 Believed to have been created sometime around 1007 by an Indonesian saint, the ancient temple structures built around the cave entrance are still ministered to and provided with prayer on a daily basis. While the site had no name when the temple was built, it gets its current title due to the thousands of bats that cling to the ceiling and walls of the natural chasm, “Goa” meaning “cave” and “Lawah” meaning “bat.” It is thought that the cave may extend all the way through the mountain right to a nearby town. Legend goes that the dark recesses of the tunnel are home to a mythical snake king known as Vasuki, a massive naga that wears a crown on his head. He is said to live on the copious amounts of bats in the cavern. Yet another legend claims that a river of miraculous healing waters rushes through the depths of the cave.

While the extent of the sacred cave has never been explored, stunningly intricate temple structures have been placed at the cave mouth, which are paid pilgrimage to on a daily basis in full view of the countless slumbering bats hanging around the rim. The Pura Goa Lawah is also host to a yearly festival where devout worshippers from all around come to pray at the mouth of this impressive bat cave. 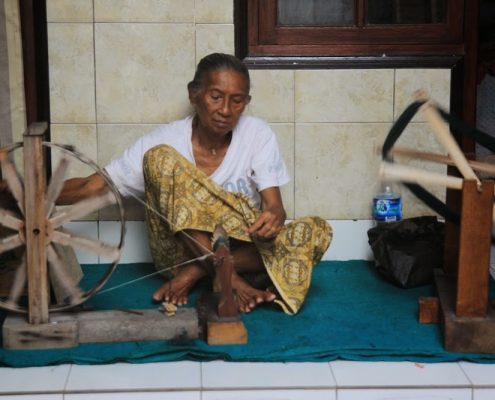 Gelgel was Bali’s first unitary kingdom from which the other eight major Balinese kingdoms broke off. Gelgel reached its apogee during the reign of Batu Renggong in the late 16th century. In 1710 I Gusti Sideman moved his capital to the more strategic site of Klungkung, which controlled the road from Gianyar to Amlapura as well as the approach to Besakih, Bali’s holiest temple. Today, Gelgel is known for its pottery and beautiful handwoven ceremonial songket.The most significant temple in the neighborhood is Pura Jero Agung, built on the grounds of the former Gelgel puri to the west of Pura Dasar.

Unusual and mysterious Pura Kuri Batu, in Jelantik village northeast of Gelgel, features beautiful carved doors of solid stone.The nearby village of Tangkas, near the coast to the south, is known for its sacred gamelan luang, a rare and archaic ensemble combining both bamboo and bronze instruments. 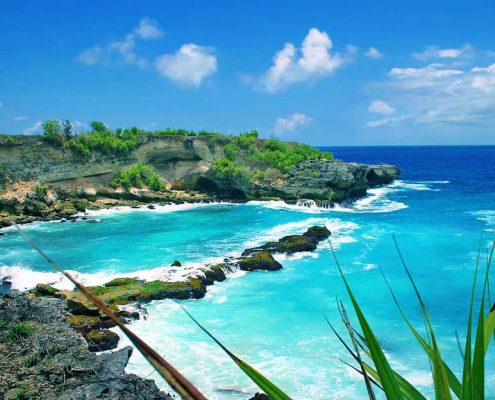 Nusa Lembongan is the second largest of the three Nusa islands in the southeast of Bali. The other two Nusa islands are Nusa Ceningan and Nusa Penida.

There are three main villages on the island. Jungut Batu and Mushroom Bay are the centres of the tourist-based industry and activities on the island. Most of the permanent local population resides in Lembongan Village. The island is surrounded by coral reefs with white sandy beaches and low limestone cliffs. It is separated from Nusa Cenignan by a shallow channel which is difficult to navigate at low tide. There is a narrow bridge linking Nusa Lembongan and Nusa Ceningan and this takes foot and motorbike traffic only.

Marine conservation is considered very important to sustain future levels of tourism on the island. The waters around Nusa Lembongan and Nusa Penida contain some 247 species of coral and 562 species of reef fish.

The island is especially interesting for those who like snorkelling and diving. Other watersports such as jet-skiing an para sailing are also present, mainly at the west coast of the island.

Nusa Dua was designed with luxury hotels and villas accommodation. Numerous big hotels line on beautiful sand beaches which offer execellent swimming in a protected lagoon area. Some resorts have private beach however most are accessible to public.

Lot of tourism place must be visit when come to Bali such as, Fasifika Museum, Water Blow, Serangan Island, Matahari Terbit beach and some of water activities in Tanjung Benoa. 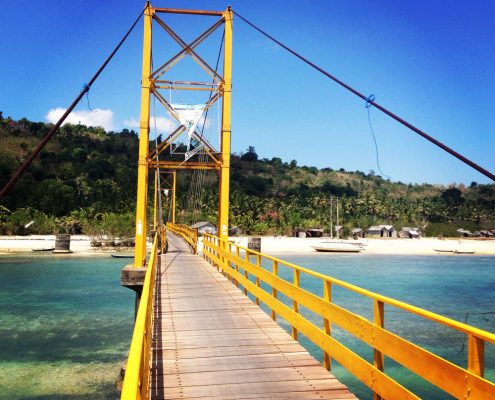 Nusa Ceningan is a smaller island located between Nusa Lembongan and Nusa Penida, which is easily reached via the yellow suspension bridge on foot or by bicycle/motorbike. There is a notable surf break off Nusa Ceningan which attracts some surfers away from the more crowded breaks on Nusa Lembongan.

The island offers some scenic roads and paths, and the westward views back over Nusa Lembongan to Bali are impressive. Viewing the sunset over Bali from the central Ceningan ridge is very much worth the effort. The estuarine channel between Lembongan and Nusa Ceningan is home to many seaweed farms and pristine mangrove forrests.

Nusa Ceningan has been slowly growing in popularity since 2009. Adventurous travelers cross the yellow bridge in search of new destinations. Several resorts and hotels have open doors in the recent years. From the look out point to the new zipline over the lagoon, this is becoming a fun island to explore and spend a few days. 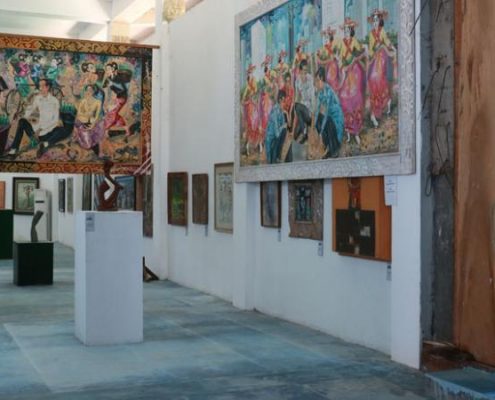 lso known as Museum Seni Lukis Klasik Bali, the Gunarsa Museum of Classical & Modern Art, is located in the town of Klungkung. The museum was founded by Dr. Nyoman Gunarsa, who was himself a Balinese painter.

Gunarsa’s studio remains in the museum, and his works are on display in the western building. Gunarsa’s works range from abstract, to paintings of musicians and Balinese dancers. His works use bright colors and also feature scenes from Balinese daily life. The museum has a large collection works by Balinese contempory artists, as well as art from temples that were in the process of renovation. Stone and wood statues occupy the main building as well as classical works from the 17th-19th century. The upstairs section has traditional Balinese artwork, historical items, furniture, masks, sculptures, embroidery.

Kamasan Village already exist since Gelgel Dynasty in Bali. At the beginning, Kamasan people worked as farmers, but since eruption on Mount Agung, most of them change their profession became Wayang painter or gold and silver smiths.

This village was and is still of great cultural importance to the Balinese as it has been the core of Balinese traditional arts for the past 600 years. It is most famous for its painters, who have been painting in the ‘Kamasan style’ for many generations. This style is derived from the Javanese style that came to Bali with the Majapahit Kingdom and is now the basis for all traditional Balinese styles.