Karangasem, home to Bali Bagus travel the most eastern and the most beautiful province of Bali. A hidden paradise, no loud traffic, no nightclubs. Just the sound of wind and waves and the local fishermen and farmers, working in the area. Often referred to as ‘old Bali’, East Bali is a beautiful area with temples, sweeping bays, volcanoes, palaces, rice paddies and ruins, of villages where crafts lost to the rest of the island are still practiced. Here you are really away from the stress of your western life-style. This regency still supports many traditions that have been in existence since the 14th century, having resisted the Javanese influence that invaded other regencies of Bali. 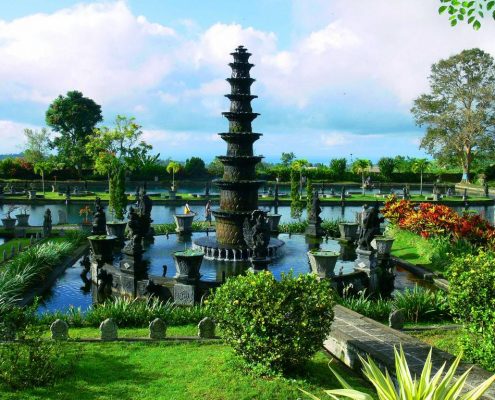 The Bali water palace of Tirtagangga is located near Ababi village in Ababi, Karangasem, situated about 6 kilometres north of the town of Amlapura. The gardens of the Bali water palace in Tirtagangga were designed and constructed in 1948 by Anak Agung Anglurah Ketut Karangasem (1887 – 1966), who was the last Raja (King) of Karangasem. He was a remarkable man to say the least, not only because he was the architect of the water gardens, but also because he helped with the construction of the gardens.

The grounds of the water garden (ca 1.2 ha.) consists of three separate complexes each with ponds and many sculptures.

Tirta Gangga literally means water from the Ganges. This is a special and holy place for the Balinese Hindu’s. The garden and the pools of the water palace are worth a visit. The garden is full with flowers and statues. You have to walk on tiles to cross the water and admire the statues up close.

The best part of the water palace is that you can take a swim in one of the royal pools. The water in these pools are considered holy by the Balinese and said to have a healing power. Next to the banyan tree you’ll find a small Balinese shrine where Balinese place offerings every day. 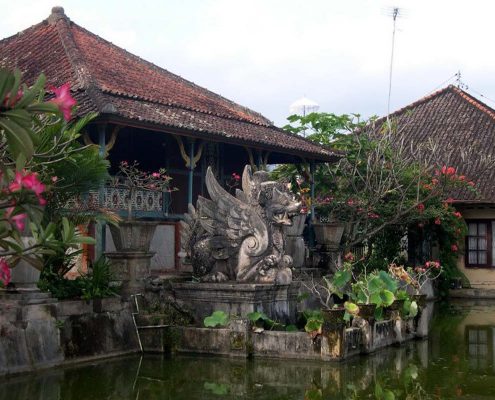 One of the major attractions of Indonesia is definitely Puri Agung Kanginan in Amlapura, Indonesia. It is basically a three-part castle with very exciting sites of interests on its own. Puri Agung Kanginan was built in the 19th Century. Its beauty, although diminished by several disasters such as the 1963 earthquake, remains magical.

Basically, Puri Agung Kanginan has three parts. There’s the residential area for the royalty, the gardens, and the Bengingah or the social hall. It is a complex of buildings that is rich in elegance, luxury, and class.

Lions guard the main gate. On the right side of the ticketing office lies another gate that will lead you to the gardens then to the innermost part of the palace where the residential apartments to the princely family are located.

The main palace precinct contains another complex of buildings. There’s the Bale London, which is decorated with carved doors and well restored paintings. It also contains the instruments of the exclusive gamelan orchestra, only being played in the presence of the Raja. 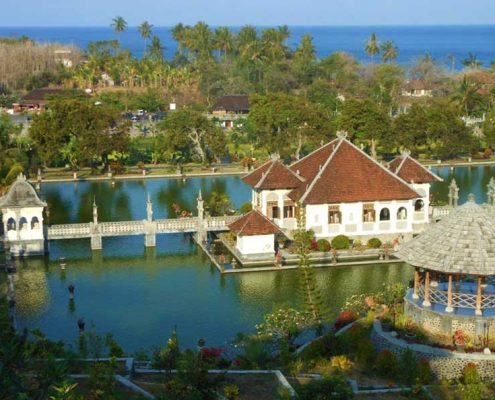 Bali Ujung Water Palace, which by the local people is called as Taman Soekasada Ujung, was built in 1919 the launching of this complex of water palace was performed in 1912 and inaugurated in 1921 by the King of Karangasem which at first used for resting place and for entertaining important guests such as kings or the Chief Executive foreigners who visited the kingdom of Karangasem.

The park features a combination of Balinese and European architecture throughout, and has three large pools, with a central building connected to the edge of the main pool via a bridge. The other pools were added later, along with a number of pavilions, meditation quarters, and the Taman Gili floating pavilions.

The site was virtually devastated following the eruption of nearby Mount Agung in 1963, and was later shaken by an earthquake in 1979. However, multiple restoration efforts throughout the decades have restored the site to its former glory, and it continues to attract both locals and visitors, who come to marvel at the flamboyant architecture and magnificent views. 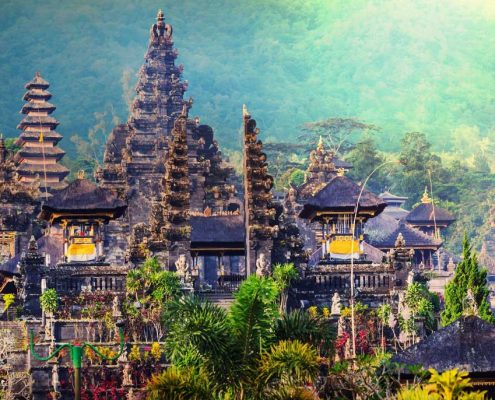 The Besakih temple complex consists of 30 separate temples which are located on seven terraces on the slopes of Mount Agung. Typically, every district of Bali has it own shrine at the Besakih complex and also every Hindu god of Bali has a shire here where he is honored regularly.

Rising majestically on the western slopes of Mount Agung, and referred to as the Mother Temple of Hindu Bali, is Pura Besakih, or the Besakih temple, covering a vast area that offers breathtaking mountain scenery surrounding this beautiful and artistic temple complex.
Facing Mt. Agung’s highest peak, believed to be the abode of the gods, and located at an altitude of 900 meters, Pura Besakih is built in the village of Besakih, in the eastern part of Bali. The name Besakih comes from the word “Basuki”, derived from the word “Wasuki” which means Salvation in the classical Sanskrit language. Whereas, in the Samudramanthana mythology, the same name “Besuki” in fact refers to the Dragon-God “Naga Besukian”, who inhabited Gunung Agung, the main volcano in Bali.
This grand temple complex has been revered as a holy place since ancient times. The first recorded mention of its existence comes from an inscription dating back to 1007 AD. It is known that since the 15th century Besakih was regarded as the central temple of Hinduism in Bali. 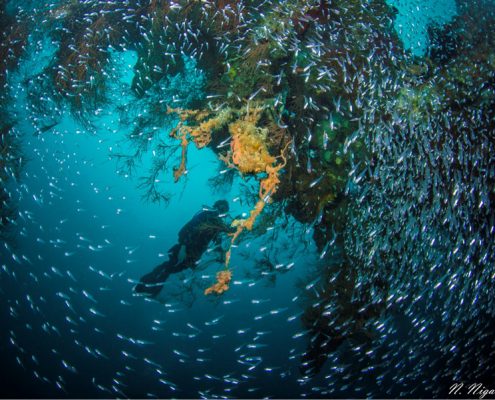 The Liberty shipwreck is considered Bali’s most popular dive site. The American ship USAT Liberty was an armed cargo steamship that was torpedoed by the Japanese in 1942. The years under the sea have transformed it to one of Indonesia’s most beautiful artificial reefs. Stunning gorgonian sea fans, huge soft coral trees and big-barrel sponges all flourish here. A resident school of big-eyed jacks live on and around the ship and are unafraid of divers, so it’s safe to enter the school and have them whirl around you. The ship is also a haven for emperors, batfish, sweetlips and parrotfish, 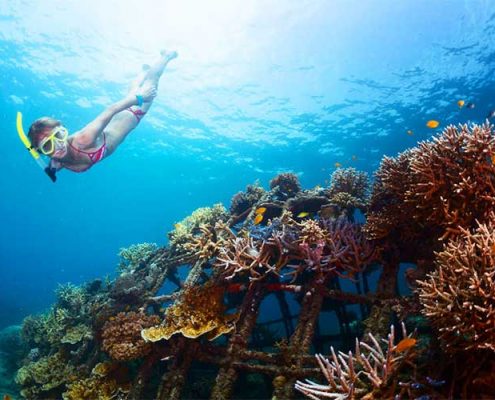 The Japanese wreck at Banyuning near Amed is the “other” shipwreck in the area and although it clearly plays second fiddle to the Liberty wreck at Tulamben – which is tough because the Liberty is generally ranked as one of the best wreck sites in Asia.

Its location in shallow water, just off the beach in Lipah Bay near the small village of Banyuning, places it close to Gili Selang where the forces of the Indonesian Throughflow are at their most powerful.

Which means there is an abundance of nutrient rich water feeding the marine life on and around the wreck. 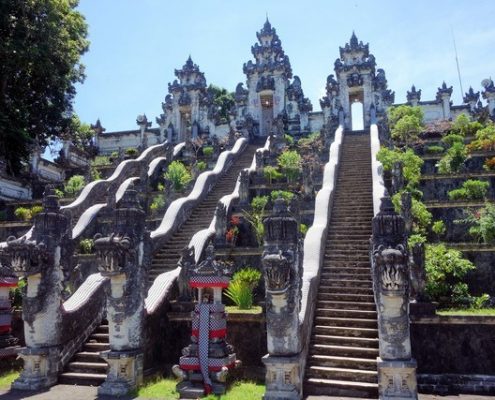 Pura Luhur Lempuyang is like several other temples in this list one of Bali’s most important religious places.
The temple is never really crowded. So if you are fit and ready for a challenge that gives you a very special reward in return, this temple should be high up on your list of things to do on Bali.

It’s a very scenic and very holy place to visit. Located in east Bali within the highlands of Mount Lempuyang this temple is not only one of the most difficult to get to, but also one of the most sacred on Bali. 1,700 steps cut into the mountain are between your parking lot and the shrines. This means a 1 1/2 to 2 hours of physical challenge leading you uphill through the breathtaking jungle. 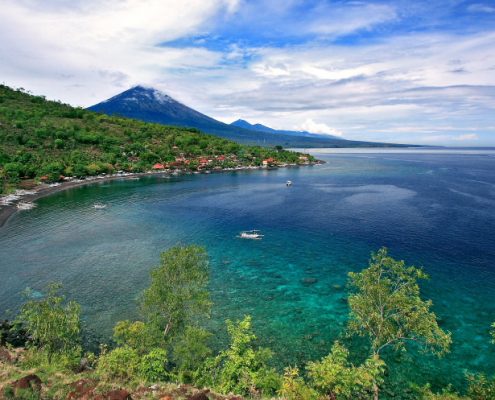 The pace of life is slow here, it is one of the last unspoiled areas of Bali and until recently it’s best kept secret. We have more natural attractions than any other part of Bali. Some of the best diving and snorkeling spots, empty beaches, rice fields and waterfalls. In the area you can find tropical forests, royal palaces and ancients sights. Step out of your hotel and turn your watch back 20 years as you are surrounded by village life, some unchanged in a century.

Rise early and you will be treated to a colorful sunrise giving a dramatic view of the jagged peaks of Lombok and an azure sea studded with litteraly hundreds of fishing boats returning with the morning’s catch. Amed is a divers and snorkelers paradise with amazing coral reefs and even a bombed Japanese patrol boat, all just off the beach. 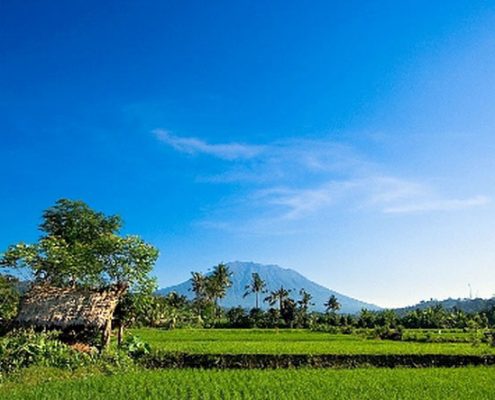 Visit Iseh village in Karangasem during your East Bali holiday. It’s natural beauty has attracted famous painters such as Walter Spies and Theo Meier since the late 1930.
Iseh developed as an tourist object  because it has a stunning natural beauty with a background full of natural life of rural tranquility and peacefulness attracting many tourists to stay longer. Overlay plots of terraced rice fields with the activities of traditional farmers, winding rivers, and majestic Mount Agung which appeared in the distance is one unit of stunning natural beauty.
In addition to the panorama of nature, Iseh also interesting to be used as a trekking tour. In this place also can be obtained woven fabric and songket endek Karangasem typical processed with traditional loom. 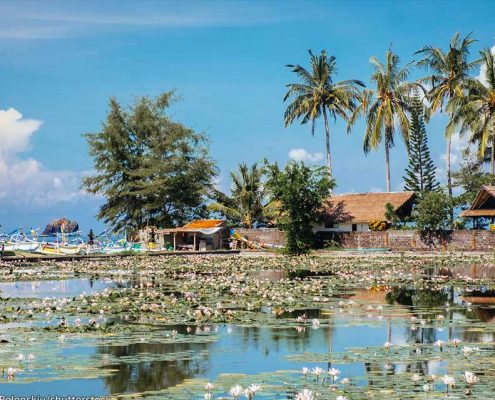 Candidasa is a seaside town in eastern Bali that rests on the edge of a fresh water lagoon. Balinese temples and hidden beaches, this former fishing village has all the amenities you need for the perfect vacation.

Candidasa has beautiful white and black sand beaches. It is one of the famous tourist places in east part of Bali, yet very relaxing. In this town you can find many art and souvenir shops on the side of the roads. Candidasa is also a great spot for diving and snorkeling. 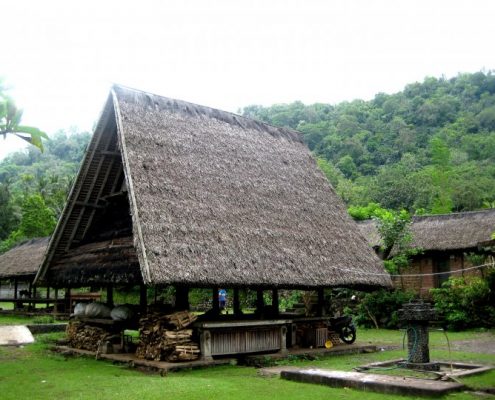 Tenganan is one of several ancient villages in Bali, which is usually called “Bali Aga”. There are some versions of story telling us the history of Tenganan village. Some say that the word Tenganan was derived from the word “tengah” or “ngatengahang” which means “move to the inner area”.

Bali Aga village means a village that still hold the origin traditions and rules of ancient Balinese and the people living in the village are “Bali Aga,” the original Balinese people. The houses are designed the traditional way, the village people still hold the traditional religious ritual ceremonies, and live the ancient Balinese lifestyle of using every means to keep their lifestyle pure and clean. The Tenganese people who move out of the village are not welcomed back, nor are their spouses if the village people get married to outsiders. Only Bali Aga people are allowed to live here, meaning only those people who were born in this village, and there are around 400 people still living in this small village, which is an hour a ride away from the international airport in Bali.

Two villages that are renowned for village handicrafts such as stone carving, woven crafts and traditional costumes. Famous for its gamelan gambang. The bale agung of Asak is located inside the Pura Bale Agung in the center of the village. This temple is the true center of Asak’s village life, includes the communal kitchen for preparing ritual feasts and the three gamelan orchestras: gamelan gong, gamelan selonding, gamelan gambang, each in their own pavilions. At the northern part of the village is the Asak’s oldest temple, and along the east side of the road the village is a series of clan temples.