The district of  Gianyar is famous as the heart and soul of Balinese culture, a region where traditional arts, crafts and ceremony are still remain a vital part of everyday life. Gianyar site is one of the Bali’s oldest kingdom, the 14th century Buddhist Warmadewa dynasty, and culture in the region has long revolved around the still-thriving royal courts. Even today in the 21st century, residents of Gianyar still follow the traditional tenets of Balinese Hinduism, including adherence to a caste system and participations in a constant round of communal religious rituals. 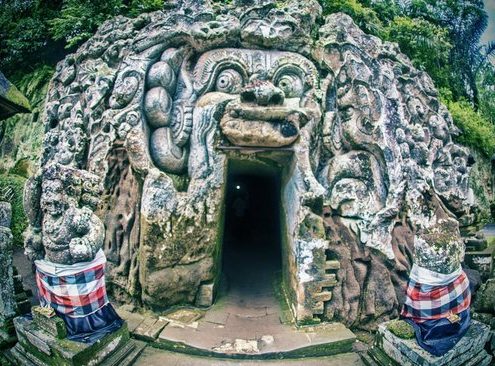 Goa Gajah Elephant Cave is one of the most ancient andinteresting sights that Bali has to offer and is a popular place to visit and offers a collection of caves that have been carved by the Buddhist people of Bali around the time that Buddhism and Hinduism where side by side on the island. You will see that the faces and statues are very similar to the traditional statues that you will see today and all through the Balinese history showing that this style has been alive for over a thousand years. 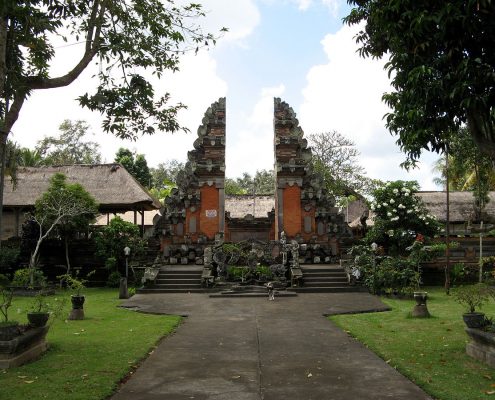 Pura Penataran Sasih or Temple of the Moon. It contains the famous bronze Moon Drum, said to be over 2000 years old. It is the largest, single cast, bronze drum in the world. Good examples of 13th and 14th century stone carvings can be found at the nearby Pusering Jagat and Kebo Edan temples. 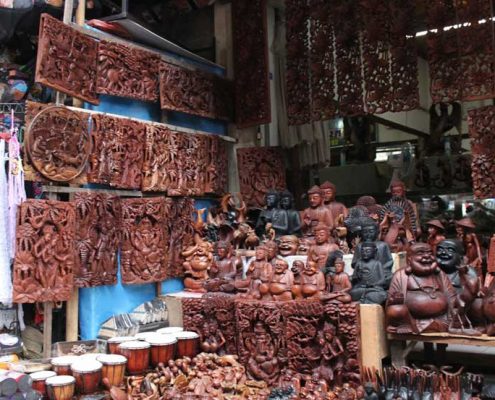 Pasar Seni Sukawati , a most pleasant place to shop for good deals. Sukawati area is known as the center of arts. Almost all kind of Bali’s souvenirs are available on this market, from woodcarvings to paintings, clothes, traditional goods, jewelries and so on. The market provides a wide range of products with no fixed prices so with patience and a sense of humor, feel free to bargain! 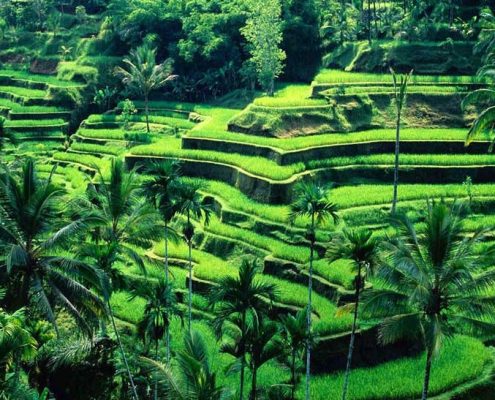 One of the most spectacular rice field terraces is Tegallalang area, just about 15 minutes drive outside of Ubud. Surrounding gorge full of rice fields has over the years attracted many photographers who captured its images on film and photos. Overtime Tegallalang rice fields became an attraction in itself.

The village well known for its handicrafts centre especially for wholesale and export, a long of the road you will see a lot of the shops, they sell variety of painted woodcarving with colorful designed. 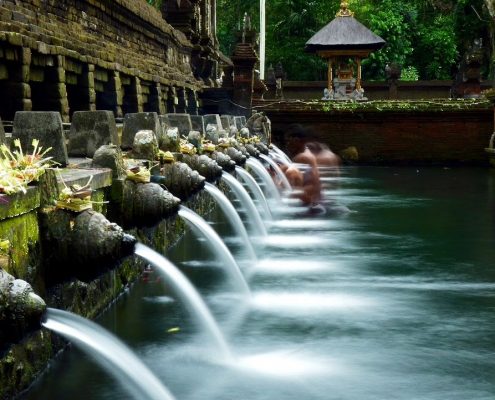 Legend has it that the sacred spring was created by the god Indra. His forces had been poisoned by Mayadanawa, so he pierced the earth to create a fountain of immortality to revive them. An inscription dates the founding of a temple at the site to 926 AD. Ever since – for more than a thousand years – the Balinese have come to bathe in the sacred waters for healing and spiritual merit. 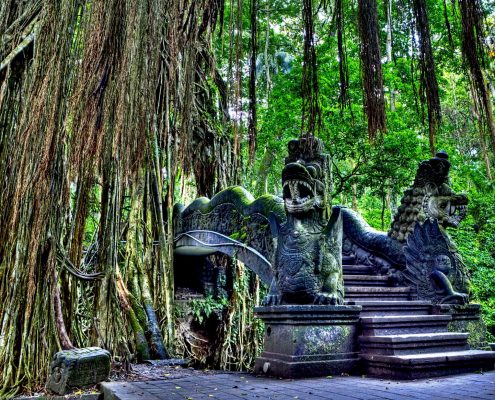 Ubud Monkey Forest is a small tropical forest where you can see the group of monkeys live there. Based on the local resident believe that these monkeys are protecting the forest with all its content. There is a Hindu Temple existing in the corner of forest with full of the huge and high tropical trees. All monkeys in this place have tame and dwell this forest together in each group area. This monkey forest is right located in the hearth of Ubud Village with beautiful souvenir shops along the road and just a step from the Ubud Art market. 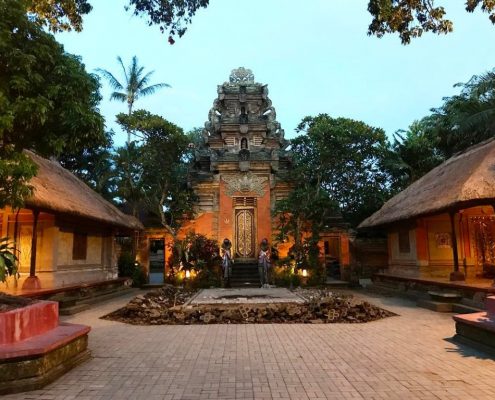 Puri Saren is an Ubud King Palace where it is used as a governance center in the empire era. You can see the beautiful houses building that are designed with Balinese traditional style and full of wood carving decorates it. The luxury Entrance Gate (Candi Bentar) and dressy ancient house building are decorated by the fertile tropical garden. This Palace is right located in the hearth of Ubud Village and opposite to the Traditional Art Market. 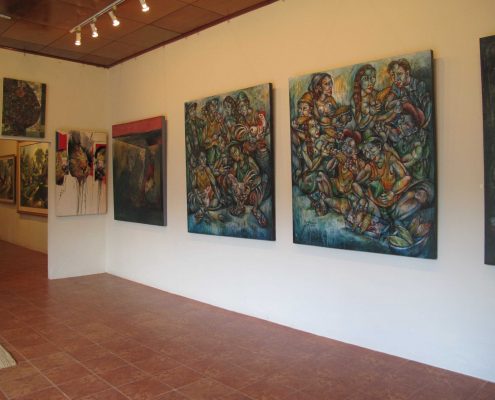 Museum Rudana or Rudana Art Museum was built in Peliatan, Gianyar Regency, Bali, by Nyoman Rudana. It is built following the concept of the Bali philosophy Tri Hita Karana, where art has a great contribution in spreading world peace, prosperity, and brotherhood amongst mankind.

The humanist concept of the Rudana Art Museum is the main philosophy of Nyoman Rudana in collecting paintings in the museum. 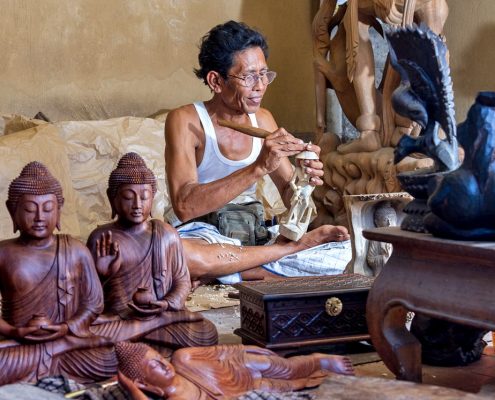 Mas is located just outside of the main Ubud village.

Today the village appears as a succession of palatial art shops, Mas has developed into a flourishing center for the Bali’s woodcarving craft. Mas Villagers are not different with other people in the tourist destination village in Bali, where they have undergone a transformation from the agrarian to the craftsmen societies and now continuing to the societies of both trade and procurement of souvenirs for domestic and foreign tourists.

Although the principle identity of Mas Village is sculpture village, it is now also developing several tourism objects and attractions that have enriched the fascinations of this village. One tourism object and culture attraction with huge potential and importance in the northern of the village is Rudana Museum, one of the monumental museums about Bali’s art especially painting. This museum has many collections, distinctive and collected the various of art. 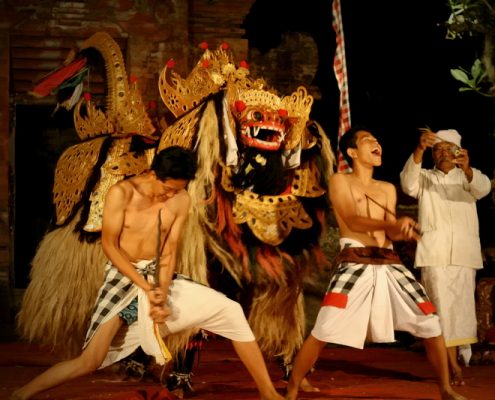 Barong is a character in the mythology of Bali. He is the king of the spirits, leader of the hosts of good, and enemy of Rangda in the mythological traditions of Bali. Banas Pati Rajah is the fourth “brother” or spirit child that accompanies a child throughout life. Banas Pati Rajah is the spirit which animates Barong. A protector spirit, he is often represented by a lion, and traditional performances of his struggles against Rangda are popular parts of Balinese culture. The Barong Dance is often portraited with two monkeys
The Barong is the magical protector of Balinese villages. As & lord of the forest with fantastic fanged mask and long mane, he is the opponent of Rangda the witch, who rules over the spirits of darkness, in the never ending fight between good and evil. During the Galungan Kuningan festivals, the Barong (there are many types, including barong ket, barong macan, and barong bangkal) wanders from door to door (nglawang) cleansing the territory of evil influences. 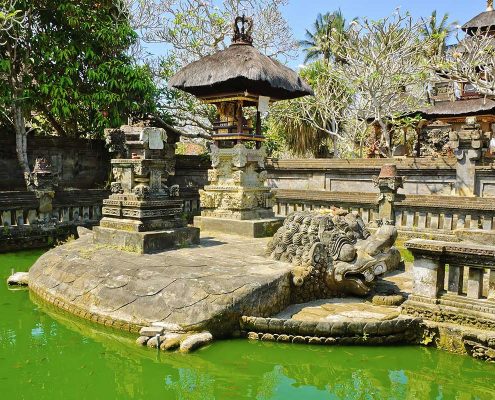 Batuan Temple is a local Balinese Hindu temple looked after by the local resident of Batuan countryside. The temple is designed very beautiful with full of Balinese ornaments and the roof temple building is made from the fiber of chromatic black palm tree.

It is strategically located beside of the main road from Denpasar to Ubud. For over a thousand years, Batuan has been a village of artists and craftsmen, old legends and mysterious tales. Batuan’s recorded history begins in A.D. 1022, with an inscription that is housed in the main village temple, Pura Desa Batuan.

The name “Batuan” or “Baturan” mentioned here prompts villagers to joke about being “tough as stone” or “eating rocks” as batu means “stone” in Balinese. But it likely refers to an ancient megalithic tradition in which standing stones served as meeting places and ceremonial sites for the worship of ancestral spirits.

Because Batuan became a center from which Buddhist priests and brahmans spread to the main court centers of south Bali, the village has an unusual preponderance of brahman. 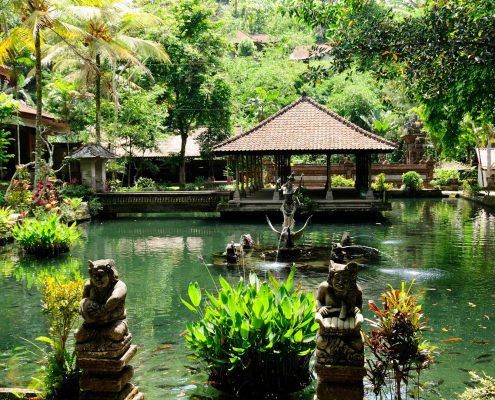 Gunung Kawi Temple is one of the most exotic temple in Bali. Located in Tampak Siring area. The most famous thing from this temple is the temple that look like crafted in the mountain, also a great Springfield in the same location. This temple located in Sebatu Village, Gianyar Regency, the temple itself crafted in a very small mountain side. From traditional myth, known that this temple related to Mayadenawa, also known as Astasura Ratna Bhumi Banten, the king who didn’t believe to god and also not allowed his people to held any kind of religious activity.

The complex comprises 10 rock-cut candi (shrines) carved into the cliff face. They stand in 7m-high (23 ft-high) sheltered niches cut into the sheer cliff face. These monuments are thought to be dedicated to King Anak Wungsu of the Udayana dynasty and his favourite queens.