Most of the north coast falls under the recency of Buleleng, once Bali´s chief port in Dutch colonial times, this town received many influences from the foreign traders. During the mid 1800s the Dutch defeated Buleleng in their first attempt to take Bali. The Dutch made Singaraja Bali´s first capital, which still has some colonial buildings and Chinese Temples.

Buleleng is both physically and culturally the “other side of Bali”. Long isolated from the south by the central volcanic ridge and vast expanse of primary forest, it has developed unique social and cultural features. The Buleleng regency stretches across almost the whole of the northern part of Bali. The area generally consists of steep mountain slopes plunging down into a narrow coastal plain. 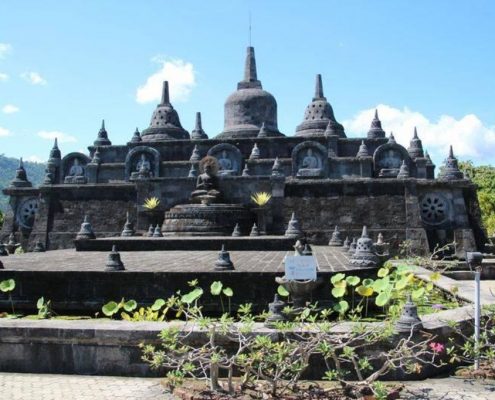 Brahmavihara-Arama is Bali’s largest Buddhist monastery, located up in the hills of Banjar, only 1.5km west of the Banjar Hot Springs. Opened in 1970, Brahmavihara-Arama comprises a hectare of hillside, with numerous meditation rooms, libraries, beautiful gardens, and an impressive mini replica of the world’s largest Buddhist archaeological site, Borobudur on its highest grounds.

The Dharmasala, located in the monastery’s eastern part, is a study where the bhiku conduct their prayers, lectures, and other solemn activities. A short walk along a footpath in the western part of the complex leads you to a Bodi tree mini-garden that features a large tree with a sitting Buddha image underneath, and a mural that depicts his path towards Nirvana. Throughout the gardens, you will encounter various Buddha figures in different postures. Most notable are two gold-plated bronze statues which were gifts from Thailand and Sri Lanka in 1977. The site is also a meditation place for Buddhist pilgrims during the holy day of Vesak or Asada. This important Buddhist observance is when the monastery grounds and mini Borobudur are at its most attractive with monks in procession. 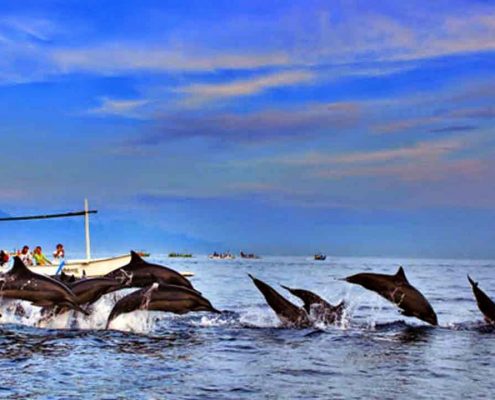 ‘Relaxed’ is how people most often describe Lovina, and they are correct. This low-key, low-rise, low-priced beach resort is the polar opposite of Kuta. The waves are calm, the beach is thin and over-amped attractions nil.

Lovina is sun-drenched, with patches of shade from palm trees. A highlight every afternoon at fishing villages like Anturan is watching prahu (traditional outrigger canoes) being prepared for the night’s fishing; as sunset reddens the sky, the lights of the fishing boats appear as bright dots across the horizon.

The Lovina tourist area stretches over 8km, and consists of a string of coastal villages – Kaliasem, Kalibukbuk, Anturan and Tukad Mungga – collectively known as Lovina. The main focus is Kalibukbuk, 10.5km west of Singaraja and the heart of Lovina. Dolphin Trips – These trips leave early each morning and are great fun for the kids. 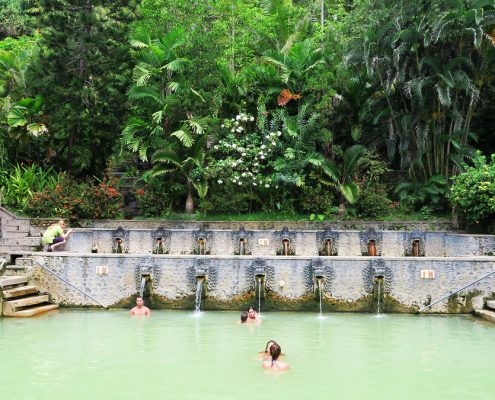 The sacred hot springs ‘Air Panas’ of Banjar are set in the midst of the jungle in a beautifully landscaped tropical garden, close to Lovina Beach, and it consist of three public and one private pool. The sulphuric water is of volcanic origin and has an agreeable warm temperature of 37 degrees Celcius, ideal for people suffering from rheumatic diseases.

There is a cozy restaurant on the grounds of the hot springs where you can have a good lunch against low prices.  At the right side under the elevated restaurant are a few changing cabins, cramped and rather smelly, and an outdoor shower can be found adjacent to the largest pool. 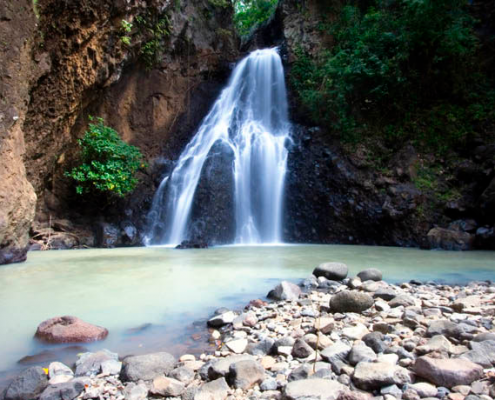 To get up to Singsing Dua you do have to do a bit of climbing up the hill and travel through a canyon and cross over the river a few times so be prepared to get your feet wet. 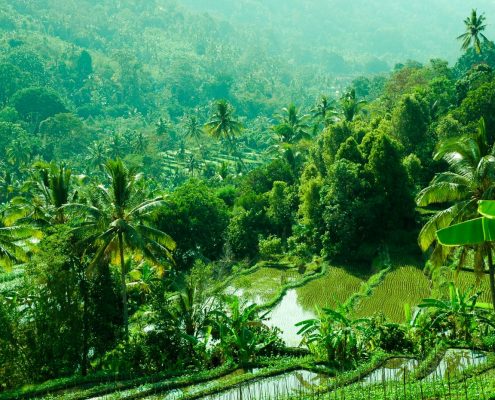 Munduk and the nearby villages of Kayuputih and Banyuatis are dotted along the scenic drive of twists and turns between Lake Buyan at the west of Bedugul to Seririt on Bali’s northern coast. Although Munduk village itself looks unassuming when you travel down its single main road, the buildings hold a hidden secret: behind them are the region’s prime spots for watching sunrises on one side and sunsets on the other.

Often overlooked by tourists, Munduk’s cooler climate comes to many as a welcome break from the humidity common in the rest of Bali. Trekking is the big call card here and you can see why with the myriad of trails through the forested hills to hidden villages, the two main waterfalls and the coffee and cocoa plantations.

Dutch colonists used to stay in Munduk to escape the heat of Singaraja, Bali’s second largest city and the centre of the island’s colonial past. The Dutch built an assortment of rest houses for those wanting a break from the city. You can still see evidence of these colonial-style buildings today, some having survived by being converted into guest houses. 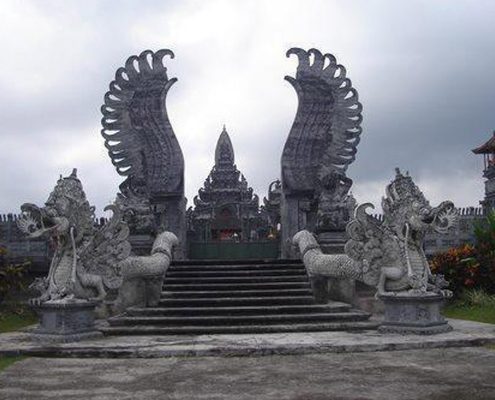 The largest temple in North Bali as well as the most important in Singaraja, Pura Agung Jagatnatha features a Padmasana, a shrine that symbolically represents the three parts of the Balinese Universe as well as a wall relief depicting the horrific consequences that await those guilty of earthly sin.

The state temple Pura Agung Jagatnatha is dedicated to the supreme god, Sanghyang Widi Wasa, the supreme of divine gatherings. The name Jagatnatha derives its origin from the Sanskrit word jagat meaning world. Two festivals based on lunar cycles are celebrated here every month. During the days of full moon and new moon, visiting this temple during these times can be a memorable experience. No matter what time you visit this magnificent temple you will always find devotees in prayer.

The magnificent shrine shaped in the form of Padmasana or, lotus throne, has the grandiose and spiritual significance of the highest order. The padmasana (shrine) is made of white coral, and consists of an empty throne, symbolic of heaven, on top of the cosmic turtle and two naga or mythological serpents, that symbolise the foundation of the world. 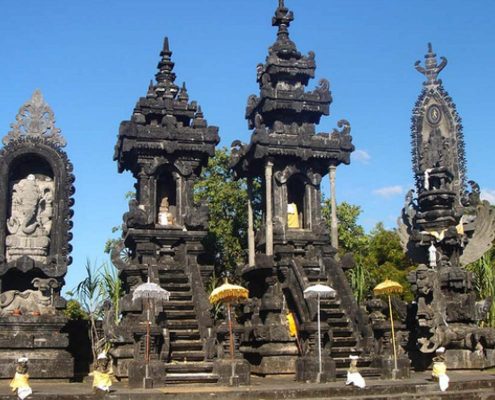 Constructed from black lava rock, Pura Ponjok Batu was built in the 15th century and overlooks a small stone ponjok (projection). It lies atop a circular hill surrounded by a six-sided wall with three entrances while inside the holy inner courtyard is a walled island containing limestone shrines. The pura was built in homage to Danghyang Niratha, a Siwa Sidanta high priest who was first to bring Hindu dharma to Bali. 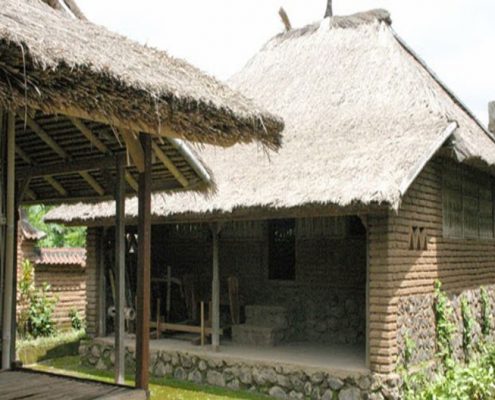 One of Bali’s indigenous Aga villages that was in existence prior to the Majapahit Empire that brought Hinduism to Bali and that still practices many ancient traditions, the most significant of which of which were their burial rites. Rather than cremating their dead in ngaben ceremonies like the rest of Bali, this village of 6000 used to simply lay their dead out on the ground with simple offering. This has changed since 1961, but the villagers of today are charged with the custody of 17 megalithic artifacts that are housed in the 20 village temples. They are also charged with the preservation of several sacred dances such as the Rejang Sembiran, Baris Dadap, Baris Presi and Baris Jojor that are only performed on specific auspicious days. The famous Balinese musical instrument, the gamelan, is made here.

The village is unique because it is between the sea to the north and the mountains to the south. Therefore it seems as if the hills are guarding the houses below. Some archaeologists have also found some ancient human fossils here.